KOOZA tells the story of The Innocent, a melancholy loner in search of his place in the world.

KOOZA is a return to the origins of Cirque du Soleil: It combines two circus traditions - acrobatic performance and the art of clowning. The show highlights the physical demands of human performance in all its splendor and fragility, presented in a colorful mélange that emphasizes bold slapstick humor.

The Innocent's journey brings him into contact with a panoply of comic characters such as the King, the Trickster and the Obnoxious Tourist and his Bad Dog.

Between strength and fragility, laughter and smiles, turmoil and harmony, KOOZA explores themes of fear, identity, recognition and power. The show is set in an electrifying and exotic visual world full of surprises, thrills, chills, audacity and total involvement.

A twist on the classic unicycle number introduces a passenger to the action. The two performers create a pas de deux in constant motion around the stage in a combination of balance, acrobatic control, physical strength, choreographic grace and a spirit of partnership. 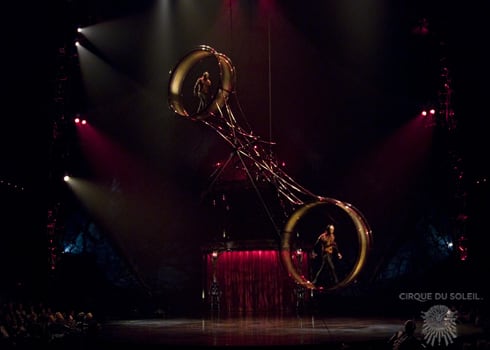 KOOZA's 1,600-pound Wheel of Death rotates at heart-stopping speeds, powered only by the two artists who leap and counter-rotate in a death-defying display of fearless acrobatics and astonishing teamwork. Like the Highwire, the Wheel of Death is positioned diagonally stage left to stage right in order to break with the usual symmetry and bring the action as close as possible to the audience.

With the ability to fly, spin, and swing in every direction, the long flowing dynamics of the aerialist’s motion is juxtaposed against the gripping, high acrobatics performed by the Straps artist. The breathtaking versatility of the Straps allows her to take command of the stage and soar to incredible acrobatic feats while continuously building the excitement to an astounding climax. She is a powerful character - distinctively feminine. 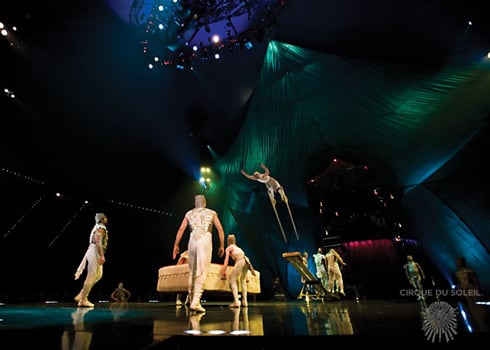 The Teeterboard flings artists into the air, where they execute quintuple twisting somersaults – and that's just the prelude for acrobats doing the same thing over 30 feet above the stage with double and single metal stilts strapped to their legs. 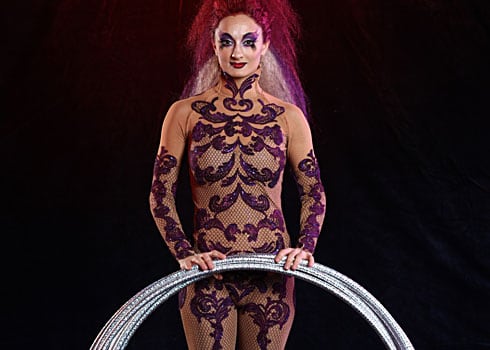 A hoops act with such a high level of difficulty is a rare demonstration of skill and the KOOZA artist is one of the best in the world. Combining fluidity of movement, physical contortion, exceptional balance and impressive dexterity, her performance is out of this world, whether she is spinning one, two, three, or even seven hoops simultaneously. 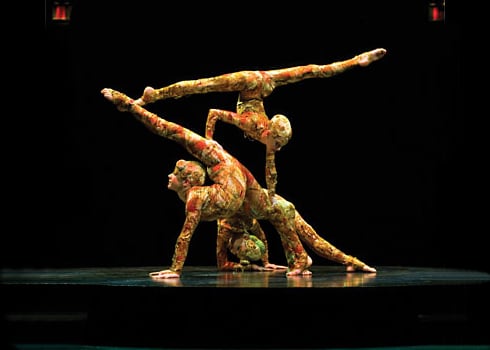 Young performers work in harmony and unison to bring a new approach to the art of contortionism. What sets this number apart is the artists' innovations in movements and position, their speed, and the way they work as a team to create tableaux of sculptural beauty. 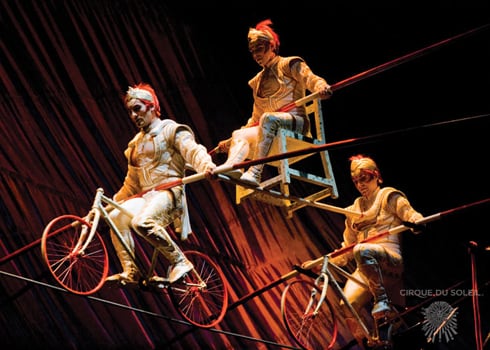 The twin high wires criss-cross diagonally stage left to stage right at 15 and 25 feet above the stage, and the four tightrope walkers add their own tension to the 6,600 pound load on each rope. 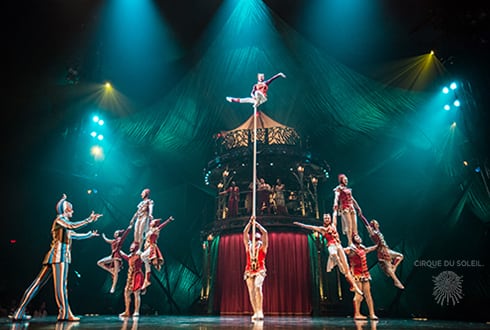 The 19 artists of the House Troupe burst into action off the top of the show, combining acrobatics, rapid-fire costume changes and rebounds from three miniature trampolines set in the stage. The act highlights include human pyramids, bodies flying through the air and a "crash bash" – a daring dive into a circle of fabric inspired by the "Nalukauq," the traditional Inuit game of "Blanket Toss" and the landing mats used by firefighters. 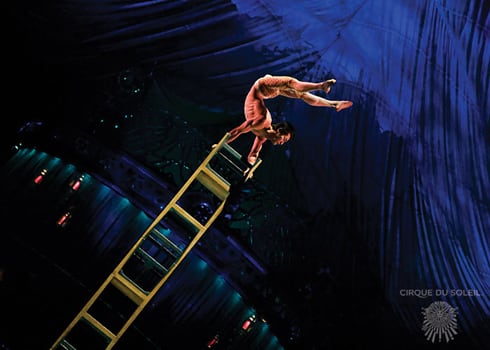 The equipment is as simple as it gets: eight chairs and a pedestal. But in this act, the artist uses them to create a 23-foot tower on which to perform a balancing act that displays the human body at the very peak of condition and muscular control. 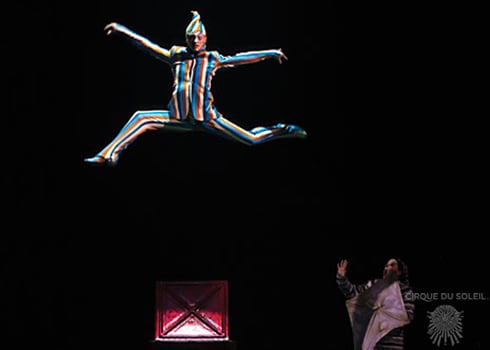 Charming and sophisticated, The Trickster is a sublimely quick and agile being, a genius who knows all about the world of KOOZA because he created it. He appears and disappears at will and there's electricity in the air each time he arrives on stage. He created this world for The Innocent and keeps a watchful eye out for him. He teases him, and plays tricks on him with his powers, but it's The Innocent's own subconscious that leads the dance… 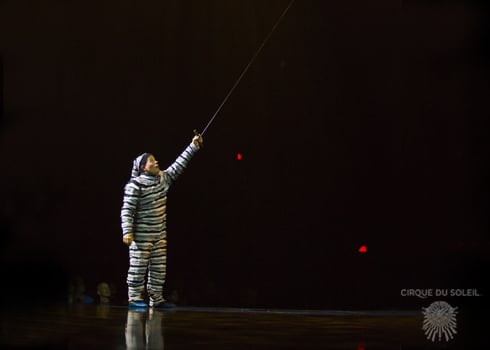 The Innocent is a naïve and melancholy loner carried off into The Trickster's world. Outwardly childlike, ingenuous and simple, he is eager to get to know the new world he's in, but as soon as he uses The Trickster's powers he discovers an unexpected and jarring environment, a reflection of his soul. 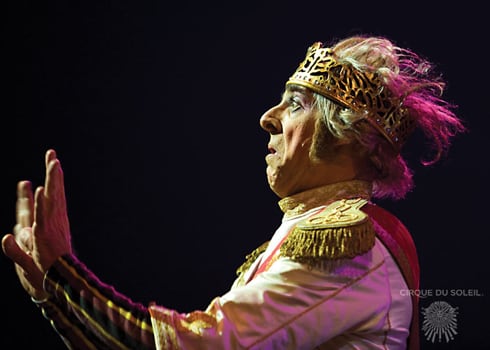 The King is the king of fools, the most burlesque of all the characters. His hair is tousled and his crown has a mind of its own as he tries desperately to gain the respect of those who are crazier than himself. 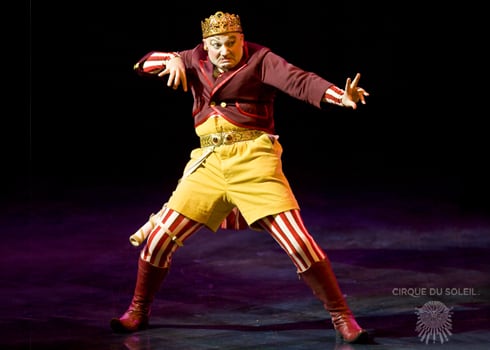 The two Court Clowns are The King's foolish footmen, his indispensable sidekicks in the extravagant adventures in the realm of KOOZA. 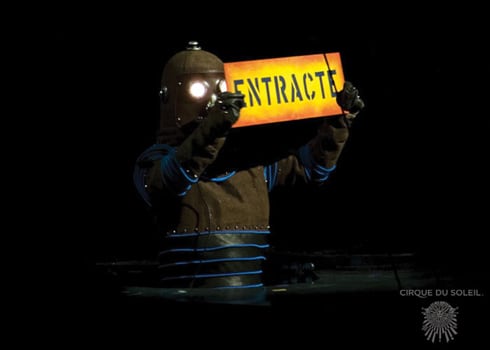 The very strange Heimloss lives beneath the stage where he's in charge of the mechanical machinery that gives life to everything in the hidden world of KOOZA. 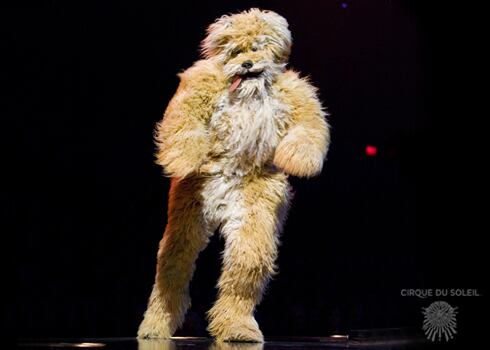 In this crazy world, even The Dog is nutty. He chases everyone, barks and is impossible to control. The word "training" means nothing to him. But like everyone else he's drawn to The Innocent and becomes his playful, over-the-top companion.

For KOOZA, Marie-Chantale Vaillancourt has drawn on a wide variety of sources of inspiration: everything from graphic novels, the painter Klimt, Mad Max movies, time- travel movies to India and Eastern Europe. She was also inspired by clock movements, tin soldiers, marching band uniforms and children’s book illustrations. All this merges to create a look that alludes to Alice in Wonderland, Baron Munchaüsen and the Wizard of Oz.

There are many rapid costume changes during the show and Marie-Chantale researched magicians’ quick-change techniques to create costume magic of her own.

One army costume features more than 400 individually- sewn metallic flaps to create the effect that it is armored.

“It’s been a great challenge, but it’s also full of traps. You don’t want to exaggerate or slip into creating a caricature when you’re trying to capture a character.”— Marie-Chantale Vaillancourt

KOOZA’s set evokes a public square that metamorphoses into a circus ring. The circular stage provides the audience with excellent sight lines through 260 degrees.

There has been no attempt to conceal or disguise the acrobatic equipment. The structure of the big top is always in full view. Everything is done out in the open with simplicity and transparency in order to concentrate the audience’s attention on the artists and the acrobatic performances.

“I wanted to capture the essence of circus itself by creating a scenographic environment that offers true proximity to the audience and where danger is palpable.” — Stéphane Roy

The music of KOOZA beautifully demonstrates the spirit of the live show with its themes of human connection and fun in a world of duality. With a stream of uplifting songs with timeless influences where forms and styles intertwine seamlessly, the music of KOOZA is inspired by the sounds of western pop culture, from 1970s funk to full orchestral arrangements. It also draws heavily on traditional Indian music.

“I was inspired by Western pop music, from 1970s funk to orchestral music. I also drew upon traditional Indian music and film scores from the 1940s and 1950s, a period I’m particularly fond of.” — Jean-François Côté 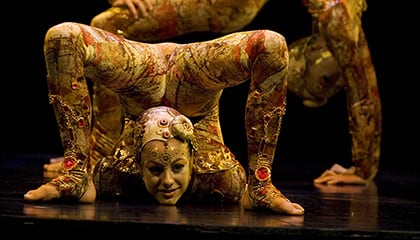 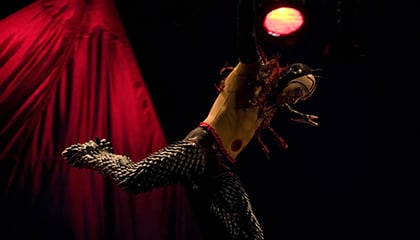 Wheel of Death from KOOZA 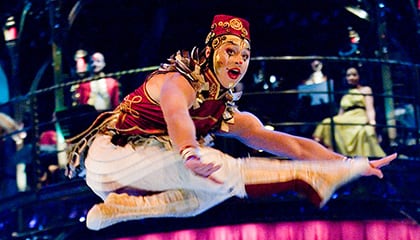 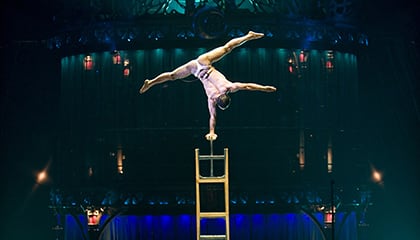 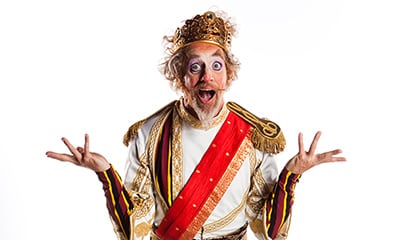 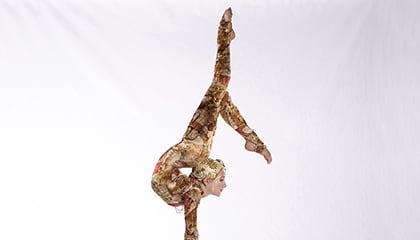 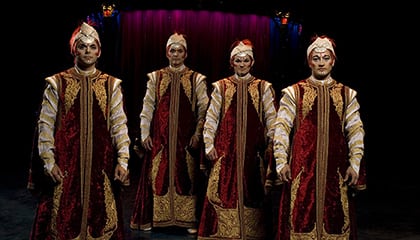 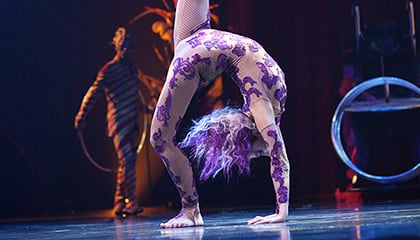 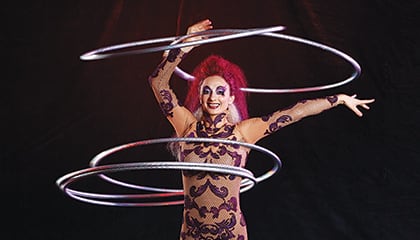 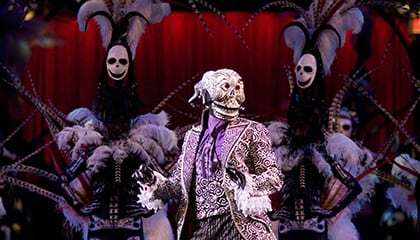