KÀ, the unprecedented epic production by Cirque du Soleil takes adventure to an all new level. Be awed by a dynamic theatrical landscape, as an entire empire appears on KÀ’s colossal stage. Live at MGM Grand, Las Vegas. 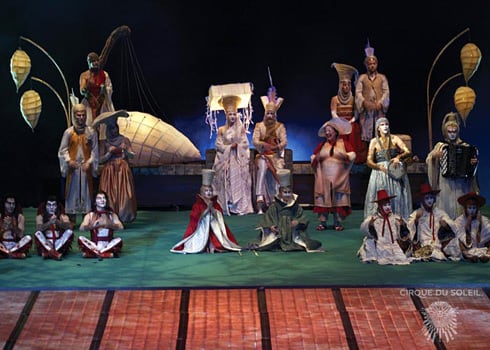 The Royal Barge carries the Twins to the festivities as they play on the deck. They are entertained by the court with a martial arts demonstration of strength and agility, including Wushu, Chinese Opera, and Brazilian Capoeira. The Twins display their musical ability with a light-hearted duet on flute, while the Nursemaid entertains guests with a lively Flamenco dance. Just beyond their peaceful kingdom, imminent danger lurks as Archers and Spearmen prepare to attack. 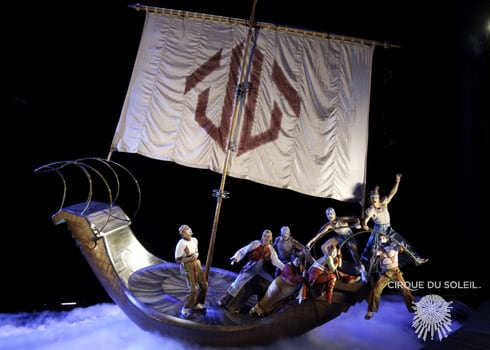 To escape the Archers and Spearmen, the Nursemaid drags the Twin Sister onto a boat and they escape by sea, only to encounter a massive storm that capsizes their vessel. The specially-designed boat structure weighs almost 1800 pounds and the rocking and turning movements are completely manipulated by the artists onboard. 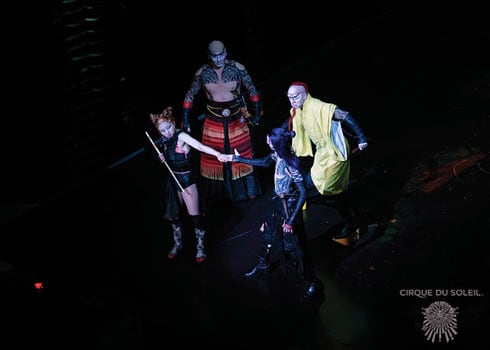 The Nursemaid falls into the depths of the rough sea followed by the Twin Sister who plunges to rescue her. Air bubbles are created through interactive video projections triggered by infrared sensors that react to the movement of the artists. 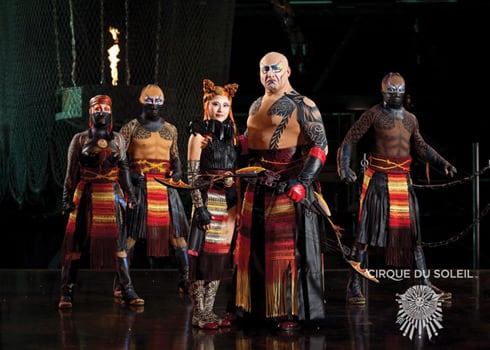 The Archers and Spearmen celebrate their victory while their prisoners languish. The Counselor's Son introduces his diabolical creation, a machine that grinds bones with the magical ore to unleash the destructive power of fire. 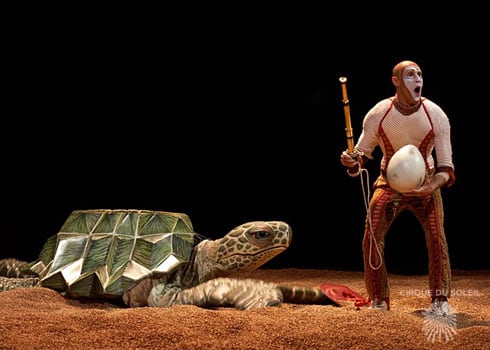 The Wash-up on the Shore

Following the boat's sinking, the Twin Sister, Nurse and Valets are reunited on a golden sandy beach. They encounter giant sea creatures, including a silly turtle, mischievous starfish, curious blue potato bug and a playful crab. The human-sized puppets are designed to accentuate the acrobatic proficiency of the performers while maintaining the animals' natural movements. The sand is created using 350 cubic feet of granular cork.

While guiding the Twin Brother away from danger, the Court Jester distracts the frightened boy by teaching him the art of shadow puppets. These simple yet poignant gestures represent one of the earliest forms of story telling. 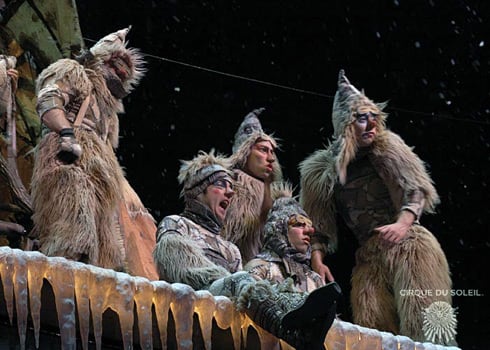 The Twin Sister is rescued by a fur-clad Mountain Tribe, who also discover the Nursemaid wandering aimlessly, and reunite the two. The tribesmen show off their climbing prowess by manually ascending 50 feet to join their fellow tribesmen on the mountaintop, as created by the Sand Cliff Deck in its upright vertical position. The accompanying video projection of the frozen cliff face reacts to the performers' movements to create falling rocks. 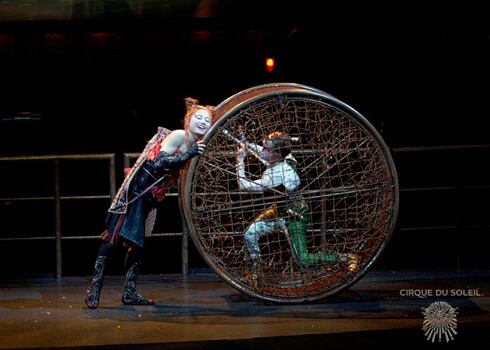 The Twin Brother in Captivity

The captured Twin Brother is imprisoned. Just as things seem hopeless, he discovers a friend in the Chief Archer's Daughter. After sharing a tender moment, she sets him free and then expresses her flirtatious desires through a touching performance using the Twins' flutes. 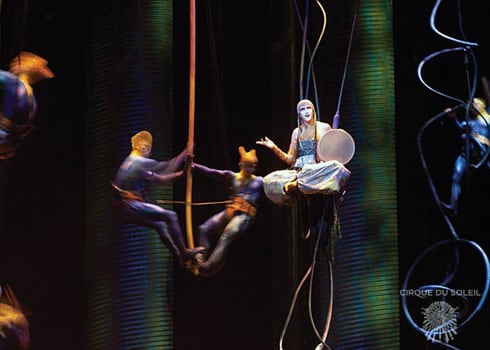 Bright luminous creatures inhabit a majestic forest, which is also the home to larger-than-life bugs, flowers and a stunning 80-foot snake. The Firefly Boy glides and dives as he performs aerial acrobatics and is soon joined by the Twin Sister when she plummets from the flying bird into his world. Together they perform an aerial duet and make a special connection. The Forest People are agile high in the trees performing on bungees and soaring through the trees. 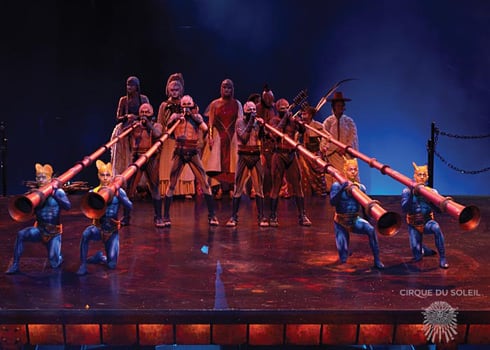 Triumphant in battle, harmony is restored to the empire. Being blinded in the battle has allowed the Counselor's Son to see the error of his ways. His gift to the kingdom is a spectacular presentation of fireworks to illuminate and unite in peace. 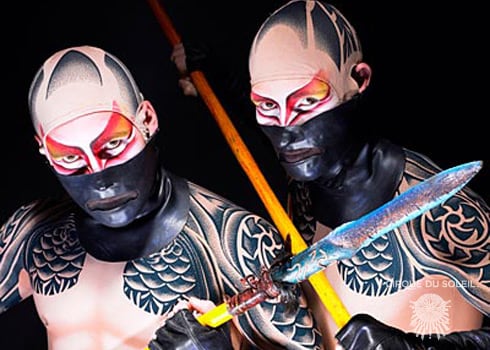 The Archers and Spearmen

Relentless pursuers, expert martial artists, loyal followers, imperialistic warriors—the Archers and Spearmen are fearsome adversaries, and they're out to destroy the empire and anyone who is foolhardy enough to stand in their way. 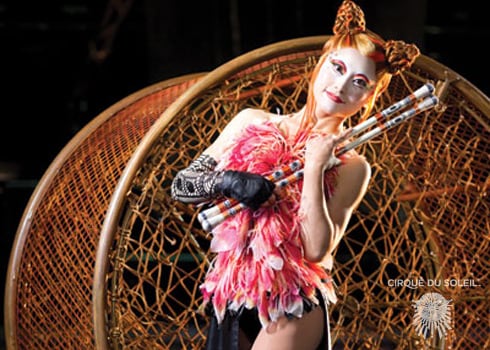 Chief Archer's Daughter is beautiful, accomplished and brave. She is desired by the villains, but she's not interested in them. When she falls for the Twin Brother she finds her loyalties unexpectedly divided, and realizes she's in a battle of wills with her doting father. 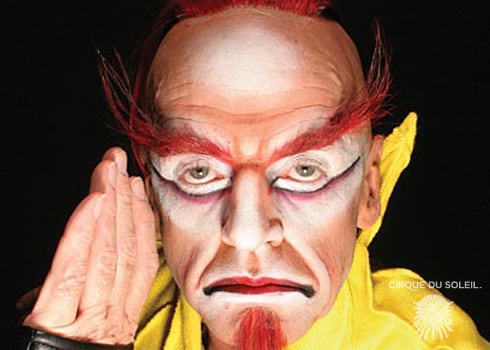 Ambitious, authoritarian and very devious, the Counselor is a villain in the classic mold. He rarely seeks the spotlight, but his hand is never far from the darker events and more nefarious deeds that threaten the heroes of KÀ. 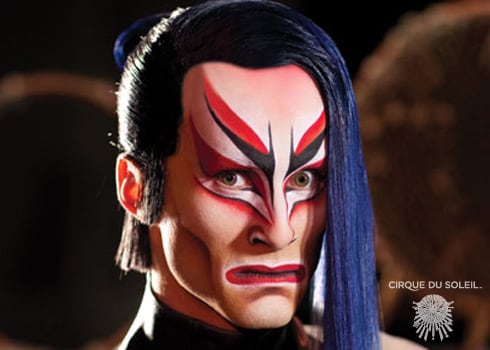 The Counselor's Son is just as wicked as his father, and he enjoys being a villain punk with a relish that just might undo him one day. But until it does, he's mad, bad and dangerous to know. But a hint of tenderness lurks beneath his tough exterior as he tries to win the heart of the Chief Archer's Daughter. 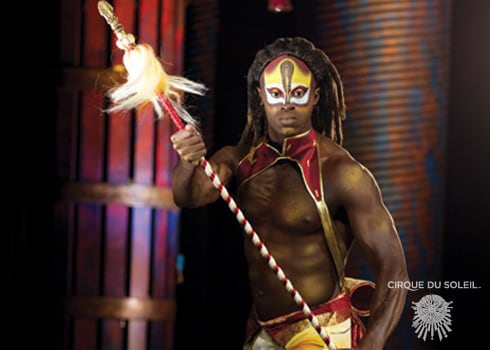 When Archers and Spearmen invade the court, the Court Jester proves to be more than a simple entertainer. He spirits the Twin Brother away from mortal danger and puts his own life on the line to protect the boy. The Court Jester demonstrates tremendous strength through Brazilian Capoeira, and his soft tenderness with the shadow puppets. 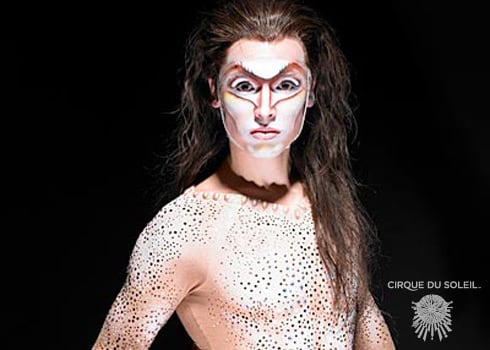 The Twin Sister finds a powerful ally and life companion in the depths of a luminous forest. Firefly Boy enchants her with incredible aerial acrobatics. As the ultimate protector, he leads her quest in the climactic battle that decides the fate of the world of KÀ. 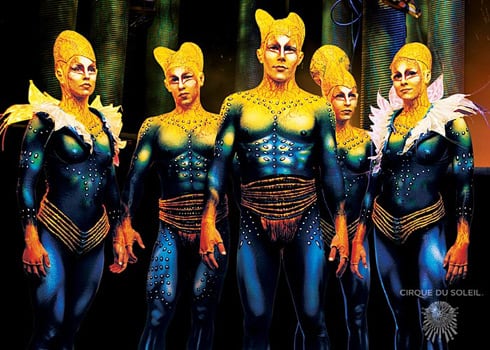 The Forest People have adapted harmoniously to their lush environment with their luminescence and dexterity. They are skillful gravity-defying jumpers who offer shelter and protection to the Twin Sister when she descends into their world.

The Mountain Tribe is a simple people living an isolated but happy life in their icy refuge on the mountaintop. But their resourceful, ingenious thinking has created a unique flying machine that saves them and the Twin Sister in the nick of time. 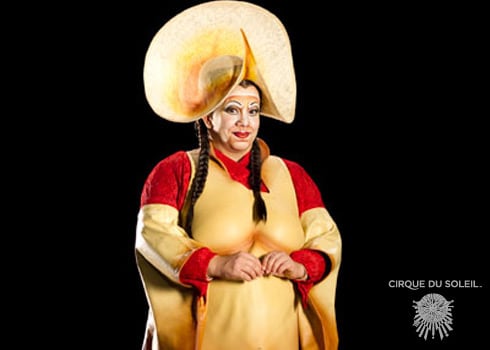 The Nursemaid's unquenchable exuberance and joie-de vivre sustain her, and everyone around her, whenever things are at their most perilous and seemingly hopeless. She is the Twin Sister's stalwart companion on her odyssey of discovery. 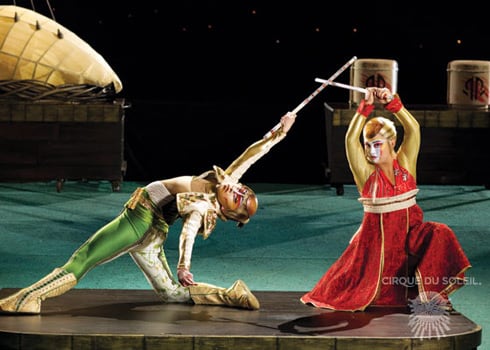 The Brother and Sister are on the threshold of adult life. Inseparable companions and martial arts (Wushu) sparring partners, they are mature for their years but still have a lot to experience about the world outside the imperial court. 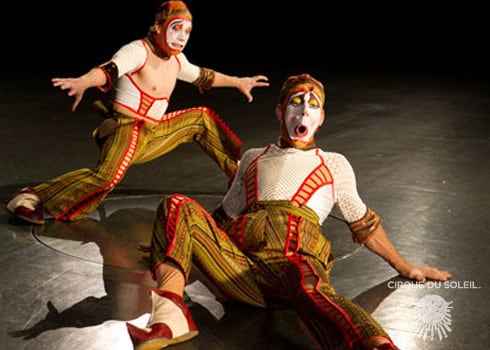 Thrust unwillingly into the heart of the action, the Valets were never quite the heroic type. But somehow they rise to the occasion and not only survive, but discover an inner strength they never suspected was there. 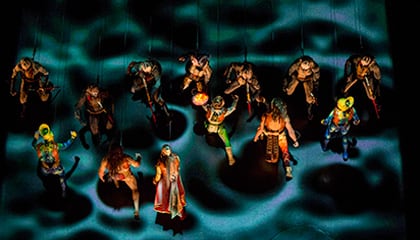 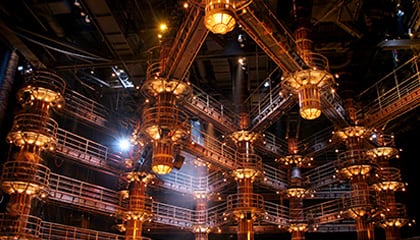 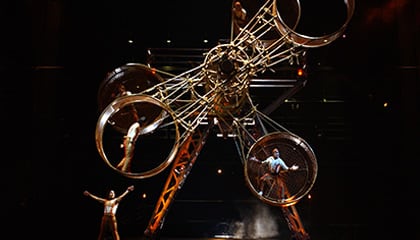 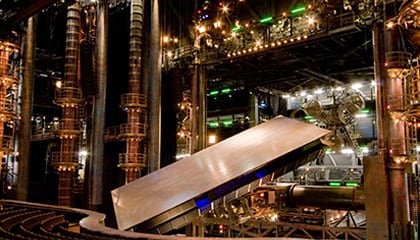 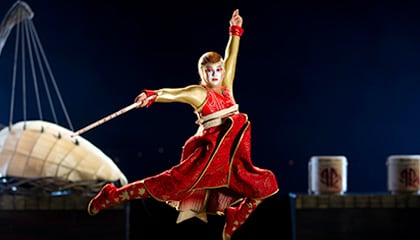 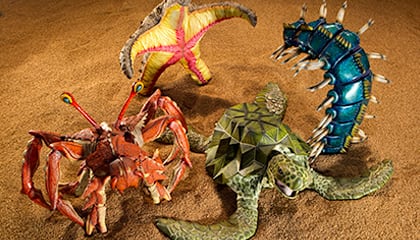 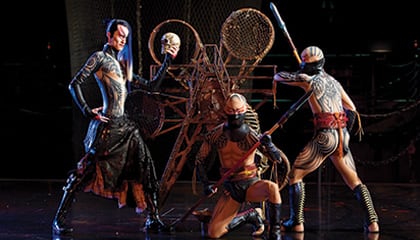 Counselor's Son and Spearmen from KÀ 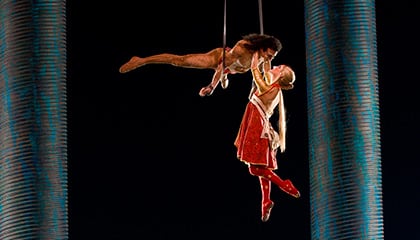